Recommended Books
The Zapping of America
The Body Electric
Cross Currents
Electromagnetic Fields
Would You Put Your Head in a Microwave Oven?
Dirty Electricity
Zapped
Disconnect
Wireless Radiation Rescue – Safeguard Your Family From Electro-pollution
Cell Phones: Invisible Hazards In The Wireless Age
Public Health SOS: The Shadow Side of the Wireless Revolution
Black on White

Sign up for EMR Updates — and get the latest up-to-date information on what is happening in the electromagnetic world of health, the environment, politics, society, and economics.

EMF Refugee Yahoo Group
EMF Refugee was set up in 2006 as a Yahoo support group with the idea of forming communities around the world as a new form of refugee needs to take shelter from the electromagnetic storm enveloping the planet. 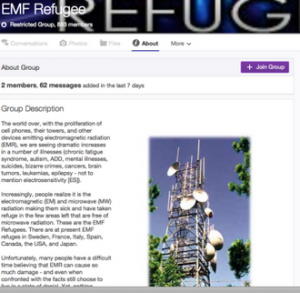 The world over, with the proliferation of cell phones, their towers, and other devices emitting electromagnetic radiation (EMR), we are seeing dramatic increases in a number of illnesses (chronic fatigue syndrome, autism, ADD, mental illnesses, suicides, bizarre crimes, cancers, brain tumors, leukemias, epilepsy – not to mention electrosensitivity [ES]).Increasingly, people realize it is the electromagnetic (EM) and microwave (MW) radiation making them sick and have taken refuge in the few areas left that are free of microwave radiation. These are the EMF Refugees. There are at present EMF refuges in Sweden, France, Italy, Spain, Canada, the USA, and Japan.

Unfortunately, many people have a difficult time believing that EMR can cause so much damage – and even when confronted with the facts still choose to live in a state of denial. Yet, nothing deepens knowledge more than experience and for the people who have been able to realize what is making them sick and can actually FEEL the microwaves being emitted by cell phones and their towers, there can be no denying this fact.

This ML has been created with the intent of bringing refugees together in countries around the world to form their own EMF-free communities in natural environments where they can heal and create healing environments for the Earth and others.

It is only by coming and working together that we will be empowered to create positive change and healing for ourselves and others and counteract the negative effects caused by the proliferation of microwave and other harmful technologies.

By creating our own EMR-free (or -less) communities, we can draw attention to our plight and influence politics positively for an EMR-Safe Planet.

Planetary life is being threatened by this and other technologies. There is ample evidence to suggest that this EMR is a major factor in a number of illnesses, psychological problems, and environmental problems including the disappearance of birds, amphibians, and insects.

The Microwave Factor Blog
The Microwave Factor blog was set up in 2005 to chronicle the majority of information coming out on the EMF topic — with Over 4820 Posts and Over 464,167 Views [and counting] containing articles, research studies, reports, and videos 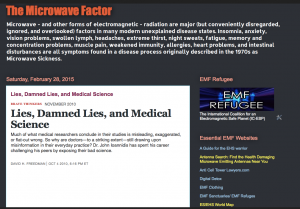