I was reading about the side effect of immunosuppression caused by pharmaceutical agents called “Calcineurin Inhibitors” and noticed that they were remarkably similar to the infections I had developed when living in the vicinity of cell towers in 2004-2005. I suspected there might be a link and made these suspicions public. Professor Olle Johansson, Ph.D. from the Karolinska Institute in Sweden, soon contacted me with the offer to co-author a paper on the subject and the rest is history. And with hundreds of hours of research and multiple rewrites later, the paper was finally accepted and then published by the prestigious journal, Medical Hypotheses. 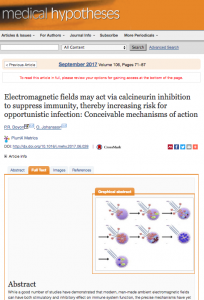 While I had heard anecdotal accounts and had read some research on the effect EMFs had on the immune system, I had never really read an account of any of the mechanisms behind such effects and hence began to suspect that calcineurin inhibition might be part of the picture. With the research I did with Professor Olle Johansson, we hypothesized that this inhibition might very well have to do with an increase of reactive oxygen species (ROS) within the cell and tied it in with Professor Martin Pall’s research on how EMFs open voltage gated calcium channels causing an influx of calcium into the cell stimulating nitric oxide synthase to produce increasing levels of nitric oxide (NO) leading downstream to a number of other ROS, which in turn inhibit the enzyme, calcineurin.

The enzyme, calcineurin is a protein phosphatase, which activates the T-cells of the immune system. Calcineurin is also the target of a class of pharmaceuticals called calcineurin inhibitors, which organ transplant recipients will take in order to prevent or suppress organ transplant rejection. One of the major side effects of taking these pharmaceuticals, however, is immunosuppression. And this leads to the increased risk of opportunistic infection: e.g., fungal, viral (Epstein-Barr virus, cytomegalovirus), atypical bacterial (Nocardia, Listeria, mycobacterial, mycoplasma), and parasitic (e.g., toxoplasmosis) infections.

Hence, it was hypothesized in the paper that electromagnetic field exposure has the potential to inhibit immune system response by means of an eventual pathological increase in the influx of calcium into the cytoplasm of the cell. This, in turn, induces a pathological production of reactive oxygen species, which further in turn has an inhibitory effect on calcineurin. Calcineurin inhibition then leads to immunosuppression, which further leads to a weakened immune system and an increase in opportunistic infection.